Phewww, get ready, this is going to be a looooong blog post;) I figured I’d recap my year in travel, TV, and book writing. Even as great as this whole blog may seem by the end, 2011 promises to be even better:) I started the year off by branching out the publishing company to begin including other great author’s books. The first 2010 release was Reach for the Top: A Musician’s Guide to Health, Wealth and Success by Dr. Timothy Jameson. It was the only book by another author we released, but 2011 already has many new books on the roster, including an update from Dr. Jameson, or “Dr. J” as I call him. 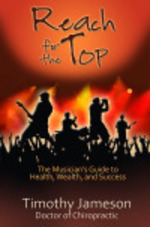 After we wrapped up Dr. J’s book, I focused on a few books for Kindle and another project I was working on. I revised my Voice RX and created a follow up called Vocal RESET. Both books work hand in hand to help singer s beat a hoarse voice and sore throat, as well as beat bad habits that affect vocal health. 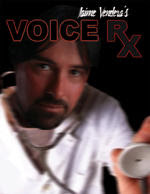 I spent so much time perfecting the techniques in these two books and the rest of my line through online teaching that I also decided to release another Kindle book to help other teachers discover the ins and outs of teaching online. Thus, Online Teaching Secrets Revealed was born: 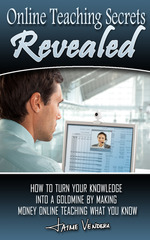 Then I took a breather, haha. In March, I was contacted to do another TV show; I hadn’t done one for over a year. This time, they gave me a little leeway to do a bit more that crackin glasses. So I called my guitarist and songwriting partner, Scott Stith  and asked if he’d like to perform on a German television show called Galileo. We performed the song “Friends” by Led Zeppelin; they wanted a tone similar to that nasty wineglass tone, so I gave em something shrill, haha. The show came out in September and we still have yet to see it, although I’ve picked up a few German students because of that show so it must’ have been a hit, haha. When I finally learn which codec to use to watch German DVDs I’ll let you know what I thought about our performance;) 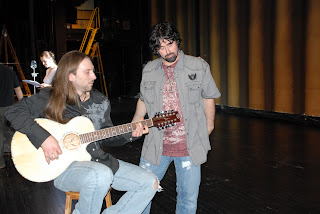 After I sang some Zep, I shattered a few glasses. Here is a shot that Scott took with his cellphone:
That show was shortly followed by a trip to Japan for the Kyouka Show. I won’t lie. It was the TOUGHEST show I’ve ever done in my life. For some reason, the Japanese love to make me stick the wineglasses in a little plastic box just to prove it’s not a trick. Well, it’s NOT a trick, but i got to feel the vibration of the glass in my hands because I am too chicken to look at it, even with glasses on, just in case it would get into my eye, which it has before. So I shut my eyes tight just to be safe.  I can do it inside of a box, but it’s tough and in the end, they let me do my thing the way it’s intended. Still the frustration had taken it’s toll, so it took a loooong time to break one for the live show, but I always get the job done. The scientist they had on site told the audience that I had “vocal cords of steel”; he couldn’t believe how I continouusly screamed at the glass until I exploded it. In his opinion, any other singer would’ve lost their voice- honestly, it was God that kept my voice going on that show;) 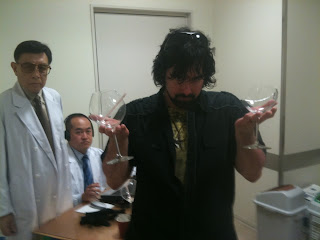 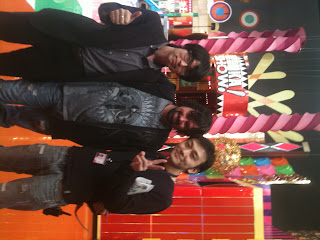 Then it was back home to the states. I landed, got home on a Tuesday, and flew to New York the following Thursday to do the Dr. Oz show. It was one of the funnest shows I’ve performed on because I got to teach Dr. Oz how to break a glass using amplification, with the aid of Bill Nye the science guy of course;) 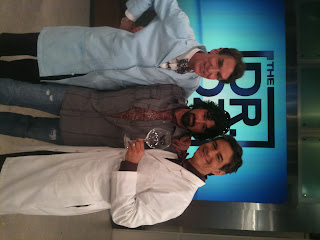 I also got to have dinner with my long time friend and business partner Daniel Middleton. 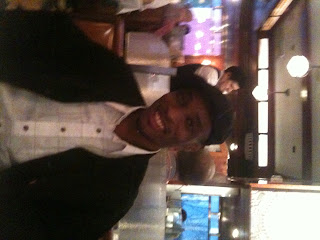 Daniel and I recently started 711 Press; a publishing company dedicated to fiction novels.Our first novel, from authors James LaFleur and Gordon Massie will be released early this year: 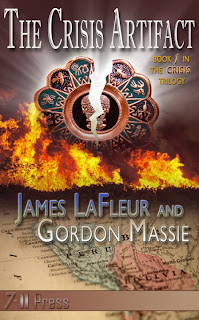 After Dr. Oz I headed back home to take another quick breather, haha. Within the hectic schedule, I made a conscious decision to begin a series of vocal workshops to share  my bizarre approach to voice strengthening from my Ultimate Vocal Workout program (theultimatevocalworkout.com).

For those of you who are familiar with my work, you know that my methods are based on my Isolation Method, Vocal Stress Release program and Extreme Breathing exercises from my books Raise Your Voice Second Edition and The Ultimate Breathing Workout; these methods are based on what I’ve learned from amazing coaches like Jim Gillette, Thomas Appell and Elizabeth Sabine with my own twist. Since we had a blast filming for Galileo, I asked Scott if he’d be interested in touring and performing as part of my vocal workshops, so within a few short weeks, we had booked workshops in both Bahrain and Australia.
We spent several months rehearsing with bassist Keith Gilbert and drummer Tim Odle. Although we strictly focused on cover tunes for the workshops, the chemistry between the four of us was so amazing that we decided to write some originals. Four down, one to go, then we will record an EP. During that time,  I had to develop the components of the  RYV workshop, so I thought about what most of my pro singers wanted most and what would be the best possible approach to giving the singers that attended the most out of a workshop that only lasted a few hours. I wanted to create a beginner’s “crash course” on all things vocal. That’s what I did! The RYV workshop layout focused on voice-strengthening techniques for keeping singers strong on the road and in the studio, sharing the same techniques I’ve taught to singers of bands like Dream Theater and Thriving Ivory. We also added some performance coaching, vocal health, and stage fright, tips and planned to discuss the best products available to singers, primarily vocal effects and microphones.
But before we could head off on our trek literally around the world, I had another show to do. Back to New York for National Geographic’s, Humanly Impossible. Great show; I got to smash five glasses and film my vocal cords while singing, screaming and making the glass shattering foghorn sound.
I also got to spend some time with my friend Steve Augeri (Journey, Tall Stories). Steve and I had dinner and strolled around NY enjoying the scenery. I also got to hear his solo material and it’s sound really good. Cannot wait till he releases it. 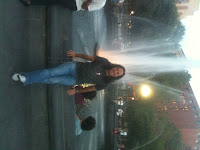 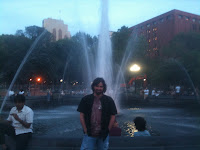 Then back home to the grind. We tightened up the RYV workshop and headed East with a TC Helicon VoiceLive2 effects processor, Create-XT vocal effects pedal, a TC Electronics Nova system and a couple of Blue EnCORE 200 microphones.
Our first stop-Manama, Bahrain. Besides the thirteen-hour flight and extreme heat of the summer, the trip was awesome. We started off with a free day, so Scott, our agent Faisal Sheikh and myself headed to the Bahrain Fort, where I almost fried. Then off to do a little radio and TV.
The next day was showtime: the workshop was amazing. It was great to see a room of people standing up making a variety of noises to discover their breath support and vocal placement.
Before the show, our agent, Faisal and an entire crew stayed hard at work- 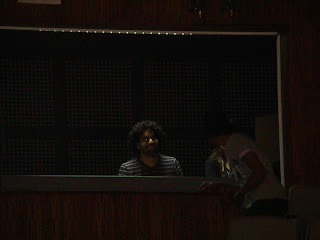 While the VENDERA Bahrain Boys, Mohammed Adel, Myself, Ali Al-Qaseer, and Scott chilled in the green room;) 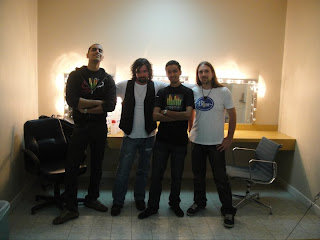 We heard too many monkeys that day (didn’t we Faisal). Confused? Come to one of my workshops and you’ll understand, haha. The workshop actually lasted three days with other classes by other instructors for songwriting and home recording. The trip ended too quickly and we were on another thirteen-hour flight.
Next stop, Melbourne, Australia, where we performed two vocal clinics at the Australian International Music Show (AIMS).
When you think of AIMS, just think NAMM down under. We were like two kids in a candy store with all the digital and six-string toys. Somehow I think AIMS took a liking to me, because I made the news and the newspaper.
I believe I became the poster child for the event, which was humbling when other amazing artists, such as Bruce Kulick were conducting workshops as well. 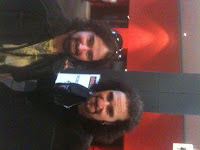 From there we headed to Sydney, Adelaide and Brisbane for  more intensive vocal masterclasses, where we met lots of great people.

We also had a chance to catch a bit of video of us sharing our passion for TC Helicon/Electronics and Blue Microphones, on the last gig of the tour in Brisbane:
And of course, we’ll never forget our agents “The Dom” Disisto and Dino Jag. Your wife cooked one heck of a meal, Dino:) Can’t wait to come back. 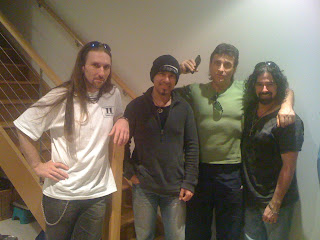 Although it seemed like the trip was forever, it was over before we knew it. The trip lasted eighteen days, and although there were many days we felt worn out, from the constant moving, jumping from hotel to hotel and eleven flights total, we wouldn’t trade this first trip for the world. We were happy to be back home and starting work on originals with our VENDERA US band. But as usual, my schedule wasn’t finished. Next stop Orlando, Florida to shoot some promo for the latest Harry Potter Movie—But, this one was for Japanese promo, so sorry guys, you won’t see the ‘glass shattering wizard’ on American TV:) 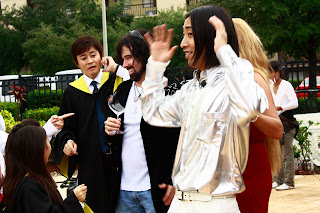 It was a fantastic, yet busy year, and now the cycle starts once again. More singing, teaching, writing and performing. . Lots more to come. In fact, we’ve already got nine new books slated for Vendera Publishing, as well as many fiction titles for 711 Press….Yes, five of the books  for Vendera Publishing are about singing;) Stayed tune for more updates. I PROMISE my next blog will be short, haha:)